Our faculty conduct cutting edge research in a wide variety of areas including Algebra, Analysis, Applied Mathematics, Dynamical Systems, Geometry, Probability, and Statistics. They have received prestigious awards and multi-million dollar research grants from federal agencies such as the National Science Foundation and the Department of Energy. They are recognized internationally as leading experts in their fields. They are also innovative and dedicated teachers. Below are some highlights of faculty research. 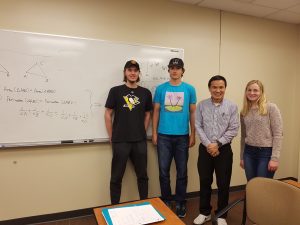 Dr. Fu’s research interest is spectral analysis of partial differential operators and geometric analysis in several complex variables. The basic theme is to study the interplay among geometric, analytic, and algebraic structures of a complex manifold. His research interest also includes invariant metrics and automorphism groups on bounded domains in several complex variables. More recently, Dr. Fu has been working on spectral theory of complex Laplacians and its application to problems in complex and algebraic geometries. He is also interested in the connection between mathematics and music.

Dr. Fu has received funding support from the National Science Foundation. He has supervised and mentored a number of undergraduate and graduate students and a high school student. These students went on to pursue Ph.D. degrees in prestigious universities or find employments in related fields.

Dr. Fu received his Ph.D. degree in Mathematics from Washington University in St.Louis. He was a recipient of an American Mathematical Society Centennial Research Fellowship in 2000.

Professor Howard Jacobowitz does research in Several Complex Variables with a focus on the geometry and analysis of CR structures.  The simplest of these structures exist as three-dimensional surfaces in four-dimensional space.  His monograph on these surfaces is now a standard reference in the field.  A related interest is an open problem (the Trautman Conjecture) suggested by constructions in general relativity.

Until the current health emergency, Professor Jacobowitz frequently lectured abroad most often in Brazil, China, and Italy. He organized and was the first director of the Mathematical Sciences Graduate Program.

Dr. Lee has in recent years worked on number theory. He has made substantial progresses on Lehmer’s Conjecture on non-vanishing of Ramanujan’s Tau Function.

Dr. Lee has supervised and mentored a number of students in Number Theory, guiding & helping them to further their interests in the topics. Some of his former students, notably B. Isaacson and C. Osborne, went to to get their Ph.D. degrees in Number Theory.

Dr. Leshen’s mathematical research is in harmonic analysis. She recently published “An endpoint Balian-Low theorem for Schauder bases,” with Alexander Powell in the Journal of Mathematical Analysis and Applications. She is a MAA Project NExT Fellow and is passionate about making undergraduate mathematics accessible and engaging for all students.

An alumni of the MS in Mathematical Sciences program at Rutgers-Camden, Chris has been affiliated with the campus and its surrounding community for many years. In addition to his teaching responsibilities, Chris is often involved with programs centered on student development and engagement, such as the Putnam competition and admissions-related activities. He is the faculty advisor for the Math Club. 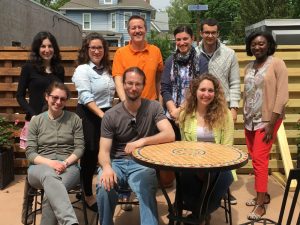 Dr. Piccoli studies a number of fundamental problems in applied mathematics, including control of traffic via autonomous vehicles, mathematical modeling for systems biology,  and measure differential equations. He has published in prestigious journals such as Archive for Rational Mechanics and Analysis and his research has been spotlighted numerous venues including NSF news and Smithsonian Magazine. His research has been supported by multi-million dollar grants from the National Science Foundation and the Department of Energy.

Dr.  Piccoli has also supervised and sponsored a number of students and postdoctoral researchers, including several Ph.D. students through the Center for Computational and Integrative Biology.   See Featured Highlights for more details about Dr. Piccoli’s research accomplishments.

Dr. Toth works in three areas of mathematics: differential geometry of minimal submanifolds, convex geometry, especially, measures of symmetry of convex bodies, and the Banach-Mazur distance, and, in algebra, the structure of the space of orthogonal multiplications in low dimensions. In addition, he has regular training sessions for gifted high school students for mathematical contests in Princeton.

In the Department of Mathematical Sciences, he teaches a variety of mathematical subjects now in canvas and zoom. He is also part of the Linguistics and Africana Program of the English Department, teaching Middle Egyptian Grammar (hieroglyphs) and history of pre-colonial Africa. 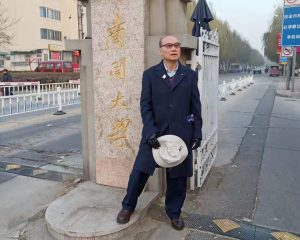 Dr. Yuchung J. Wang studied modeling categorical data and social networks under Professor Paul W. Holland. In 1987, he is among the first to use external attributes to understand the internal structure of social networks. Dr. Holland and he invented the local dependence function to study dependence among features, and between parameter and variable. He won a competitive scholarship to visit the Graduate School of Business at University of Chicago in 1993, and Marshal School of Business at University of Southern California in 1998. While he was a research Fellow at Institute of Statistical Science, Academia Sinica in Taipei, Dr. Wang promoted quality engineering (Taguchi Method), and several of his projects won national quality awards of Republic of China.
Recent research accomplishments concentrate on conditionally specified distribution; the goal is to compute optimal embedding’s for conditional models. To solve this unsupervised learning problem, he invented the iterative conditional replacement algorithm. His 2008 article in Biometrika and 2009 article in Journal of Multivariate Analysis are highly cited. His main research interest is the invention of computational algorithms to sample probability kernels, and to embed conditional distributions into a joint distribution. One of his old algorithms computes the multivariate normal integrals using precise modeling, and no integration is needed.